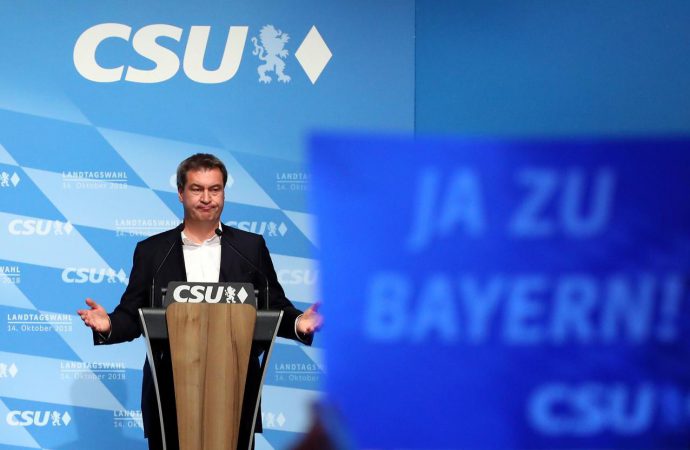 The Christian Social Union (CSU), sister party of Angela Merkel’s CDU, faces the loss of its absolute majority in the The Christian Social Union (CSU), sister party of Angela Merkel’s CDU, faces the loss of its absolute majority in the Bavarian parliament after today’s state election.

Amid a fierce challenge from the far-right anti-immigration AfD party, polls project the CSU winning only 35% of the vote—its worst electoral showing in 60 years. Under AfD pressure, Horst Seehofer—party leader and interior minister in Merkel’s government, has steadily attacked Merkel’s liberal refugee policies all year, nearly collapsing the government in July.

However, the CSU is also bleeding votes to the left. The pro-immigration leftist Greens have seen a minor surge in support in recent weeks as centrist voters abandon Seehofer’s increasingly extreme political agenda. Recent polling has the Greens in second place.

A CSU-Green coalition seems the most likely outcome based on current polling. The Greens would likely prevent a lurch to the right, especially on immigration policy. Although he denies it, Seehofer is speculated to resign post-election. The upshot is that Merkel, survives and maintains her moderate policy positions on immigration, but her coalition government remains unstable. Long-term, the CDU-CSU conservative brand—a byword for post-war political stability—has taken a massive hit and may take years to recover.