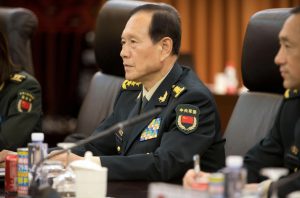 These meetings come after Chinese President Xi Jinping and Indian PM Narendra Modi held a surprise summit in April. The pair of leaders addressed trade cooperation in the wake of the summer 2017 Doklam border dispute, which drew Indian troops to meet Chinese forces on the border with Bhutan—a strategic area for India.

After more than 10 weeks of gamesmanship, both sides withdrew from Doklam, but this week’s bilateral meetings are aimed at easing deeper tensions between the two nuclear powers.

Preventing further disputes along the 3,000-kilometre border is vital for India, as China has the upper hand in regional military capabilities. PM Modi’s government will also be keen to stabilise relations with China ahead of national elections next spring.

Beijing, meanwhile, is seeking to protect a valuable trade partner, as the trade war with the US builds. Thus, expect eagerness from both countries in adopting a coordinated regional security plan, even as underlying disputed border claims remain unresolved.

Dive deeper: India and China: standoff at the Doklam tri-junction